Brentwood Christian School is excited to announce the 29th annual Partnership Dinner and Auction featuring Major General Pat Hamilton! Use the link below to sponsor the event, buy tickets, donate, and register to participate in the auction. 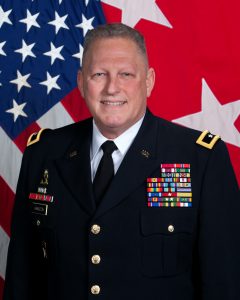 ​What Makes Leaders of Character?

Major General Pat Hamilton will be speaking about how we live our lives in this great democracy and how building young people of character is vital to our future as the greatest nation on earth.

Maj. Gen. Hamilton currently serves as the Commanding General of the 36th Infantry Division. The 36th Infantry Division is one of 18 Combat Divisions in the United States Army and is comprised of two Infantry Brigade Combat Teams, a Combat Aviation Brigade, a Maneuver Enhancement Brigade, an Engineer Brigade, and a Sustainment Brigade all totaling over 16,000 troops. Maj. Gen. Hamilton is a 1986 graduate of Texas A&M University and holds a Bachelor of Science degree in Education as well as a Master of Strategy and Security from the U.S. Army War College. He is also a graduate of the Army Strategic Education Program – Advanced Course. He is a career Armored Cavalry officer and has commanded units at the platoon, company, battalion, regiment and joint task force levels.

His awards include the Legion of Merit, the Bronze Star Medal, the Meritorious Service Medal, the Army Commendation Medal, and the Afghanistan Campaign Medal, and NATO medal for service in the former Yugoslavia and Afghanistan as well as many others.

Maj. Gen. Hamilton lives in Round Rock Texas with his wife of 32 years, Beverly. They have three children, and they attend Round Rock Presbyterian Church where he has served as a trustee and elder. He is a member of the Round Rock Rotary Club, VFW Post 9078, and serves on the Board of Directors of the Round Rock YMCA.

This fun-filled evening will take place at the Austin Renaissance Hotel on Friday, March 20, 2020. Tickets will go on sale January of 2020.

Throughout the event, our guests will enjoy bidding in the silent auction, and the night will culminate with our fantastic live auction.

To donate items for the auction, please complete the following form: Donor Form >>