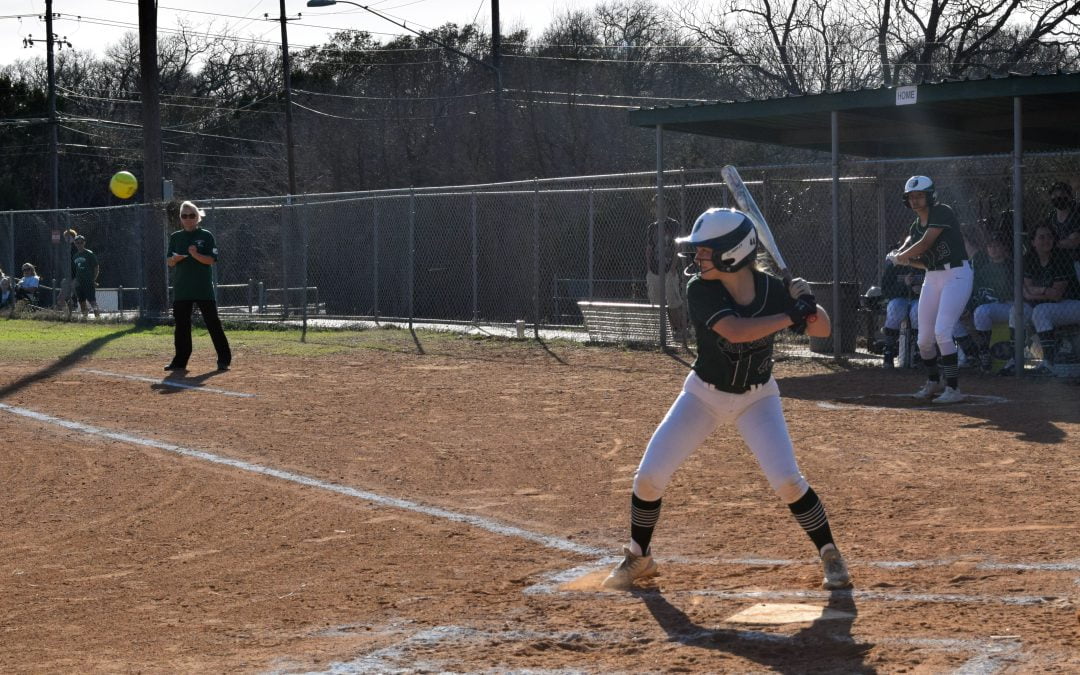 Our in-season student-athletes continue to impress this Spring.

On March 12th our varsity Lady Bears played against Boerne Geneva and won 4-3! This win put our softball team 8-0 overall and 2-0 in district. Molly Stewart pitched a complete game, and Ashlynn Alvarado and Keira Black had 2 hits each and scored 2 runs each.

On March 26th our varsity Lady Bears played against Incarnate Word. This was a nail-biting game but ultimately our Lady Bears lost in the bottom of 7th on an IW 2-out single with a final score of 7-8. Aurora Tyson 2/3 with a triple, 2 stolen bases, and 2 runs scored. Ashlynn Alvarado 3/4 with 2 stolen bases and 2rbi’s.  Ava Alvarado 2beautiful bunts to move runners. McKenna Counts – 2 RBI’s. Lola Ohlhaver 2 RBI’s. The all-freshman outfield (Macie Griswold, Keira Black, McKenna Counts) caught every catchable ball.

As for our Bears, they placed 2nd overall! After the meet Coach Washington had this to say, “Another Meet! Another top 3 finish! The boys competed well taking home 2nd place at the Yorktown Relays with a score of 133 points. Brecken Lee and Rodrigo Real placed 1st and 2nd in the 800. Chris Mayo finished 1st in the 200m dash setting a new school record with a time of 22.43. Nathan Joseph finished 1st in the triple jump setting a new school record with a jump of 41’10 1/2. Brandon Tindel finished 2nd in the triple jump with a jump of 40′ 8 1/2. Joseph also placed 2nd in the long jump. The boys 4x200m relay set a new school record as well with Aaron Lilya, Parker Combs, Brandon Tindel, and Chris Mayo as the anchor. A lot to be proud of, it is a great day to be a bear!”

On March 20th our Bears and Lady Bears competed in the Austin Northeast Relays. Even Though our boys faced some tough competition the team scored a total of 116 points finishing in 1st place. The Bears were short handed missing a few sprinters but the boys stepped up and competed well as a team. The Bears placed top 6 in almost every event, the highlights of the day were freshman Renne Cooper finishing 2nd in the 3200m, and senior Noah Shelby setting a new school record in the 100m dash with a time of 10.75. There was so much to be proud of, it is difficult to win a track meet. This is the second meet this season that the boys finished first!

On March 27th our Bears and Lady Bears competed in the St. Michael’s Relays. Our Lady Bears placed 2nd according to the meet results but they incorrectly did not include Lyla Kates 4th place finish in high jump, which would have given us enough point to place first. Juliet Booker placed 1st in the 200. Julia Glenn placed 1st in triple jump, long jump and 300m. Lyla Kate placed 3rd in the 400. Lucy Belcik placed 3rd in the 3200. Ashlynn Wright placed 2nd in discus and 3rd in shot put.  Our relay team placed 1st in the 4×200 and 2nd in the 4×100.

Between all the school records being broken and the medals being won, our track teams have been working hard this season and it shows!

On March 29th the BCS Golf Team participated in the Hyde Park Golf Tournament along with 8 other Schools from central Texas. With beautiful weather and a little breeze the BCS Golf Team faced off against a tough course designed to make you aim and place your shots in narrow fairways and greens. While some Team Members struggled on a few holes others fought back and hit some great shots. Alishah Mohammed, Clara Tillotson, Ben Hansen, Dakota Johnson played their hearts out and turned in competitive scores at the end. For the Fourth TAPPS Tournament in a row Eston Duff placed 1st in the Boys Medalist Division shooting a 1 over par 72 to clinch another BCS Golf Team Victory.