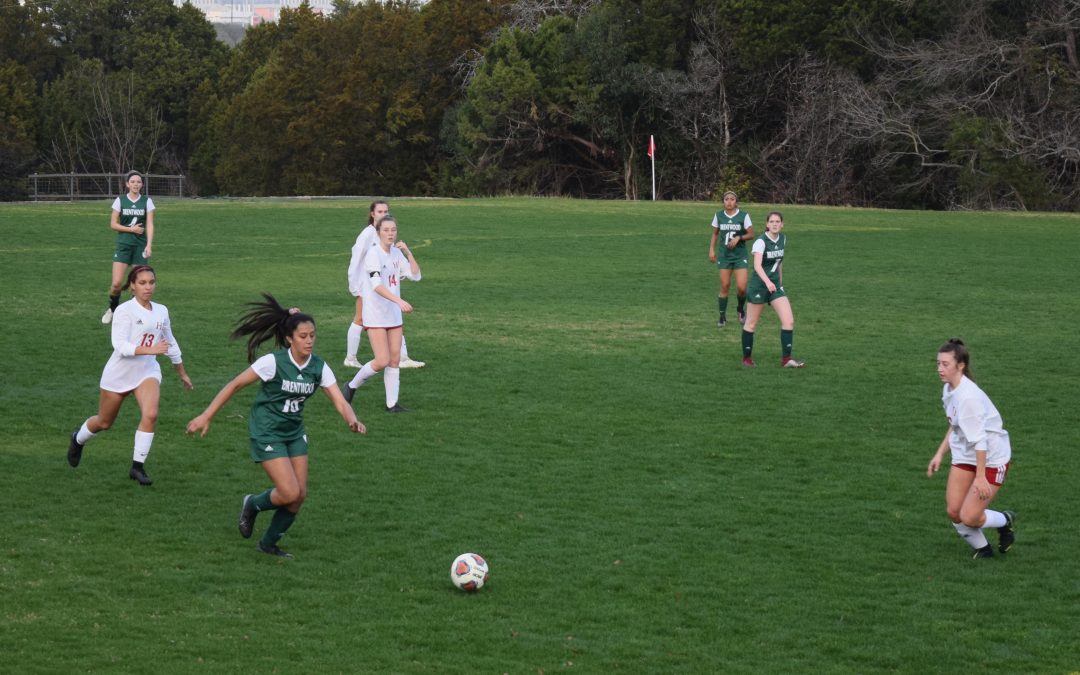 As of January 11th, our Lady Bears are tournament champions! The varsity soccer team rattled off 5 straight wins in 3 days to win the Yoe Classic in Cameron, Texas. In those 5 matches, the team posted 4 “clean sheets” thanks to stingy defense from Becca, Alyssa, and Celeste and anchored by Jillian’s strong leadership. Caroline’s 4 shutouts in goal were highlighted by one jaw-dropping save after another. Hailey, Genevieve, and Zoe shined in the midfield and setup almost all of our goals. Julia won the “Golden Boot” for being the tournament’s top goal scorer – averaging more than 1 goal per game. Ava and Hailey also had two of the prettiest goals of the season so far. Rockstar freshman Ashlynn was dominant on the wing, providing strong defense and supporting the attack. The Lady Bears are leaving Cameron with 5-0-1 record as they head into district play.

On January 14th the Lady Bears soccer team played against Hyde Park. The Lady Bears collectively secured yet another “clean sheet”. This is now the 5th time in 7 matches that our girls have shutout their opponents. The girls showed a ton of heart and grit to frustrate an opponent that nearly scored double-digit goals against us last season. Becca and Alyssa battled through pain after a long tournament. Both teams had several chances, but Caroline made one SportsCenter quality save after another. Our awesome midfield trio of Hailey, Zoe, and Genevieve slowed the match down and created several dangerous chances for our speedster Julia up top. Sydney had her best match of the season off the bench and gave us the boost we needed to endure. After 80 scoreless minutes, we went to penalties to decide the match. Caroline made a heroic save and Julia Glenn banged home her spot-kick to give our team a chance, but in the end, Hyde Park prevailed by proving to be more clinical on their PKs.

On January 17th the Lady Bears soccer team played against Regents. Despite missing 4 key starters and playing with just 11 players, the girls gave Regents all they could handle and are eagerly awaiting the rematch when they will hopefully be at full strength. Without subs and with several girls nursing injuries or illness, the Lady Bears fought hard all night and shocked Regents with 2 beautiful goals by Julia Glenn against the run of play. Caroline was magnificent in the goal as always and Hailey and Genevieve setup our goals with beautiful but lethal passing sequences that sprung Julia. Zoe was fearless on defense filling in at center back and Becca and Alyssa were warriors all match too. Hats off to Caroline, Sydney, and Emma for filling in to play the entire match against a very strong opponent. The Lady Bears lost 2-6.

On December 9th our Bears soccer team played against TMI. Despite a loss of 3-1 BCS played a great game against the defending state champions TMI Episcopal. TMI scored 2 back to back goals a minute apart midway through the first half to take a 2-0 lead but with 7 minutes remaining BCS fought their way back into the game with a goal from Joey Seo. BCS was down 2-1 at halftime. The second half was a back-and-forth, physical game with each team getting quality looks at goal. With 10 minutes left in the game, TMI scored to take a 3-1 lead to seal the victory.

On December 13th our Bears soccer team played against  SACS. SACS went up 2-0 with 2 quick back-to-back goals less than a minute apart 12 minutes into the game. BCS scored 4 minutes into the 2nd half but SACS countered 4 minutes later to open a 5 goal-scoring spree in a 12-minute span. BCS scored late on goal from Juranek but it was not enough to overcome the deficit. The Bears lost  7-2.

On January 14th our Bears soccer team played against Hyde Park and won 1-0. At the half the scoreboard read 0-0. 5 minutes into the 2nd half, Baird scored to put BCS up 1-0, which proved to be the game-winner.

On January 17th our Bears soccer team played against Regents. Regents scored midway through the 2nd half and held on to 1-0 victory over  BCS.

On January 14th our varsity Lady Bear basketball team played against Geneva School Of Boerne. Our Lady Bears played tough defense as a whole and really battled. Kelli Tindel led her team with 7 assists, but ultimately we lost 24-34.

On January 16th our varsity Lady Bear basketball team played against Austin Waldorf. Alyssa and Celeste were leading scorers but in a losing effort 32-52.

On January  22ndour varsity Lady Bear basketball team played against Hyde Park and won with a score of 25-44! Kelli had the most points with 14 points and 3 three-pointers!

On January 14th our BCS boys basketball team played against Boerne Geneva. The Bears lost a close game at Boerne Geneva with a final score of 55-56. After starting off slow, the bears came on in the fourth quarter before running out of gas and coming up short.