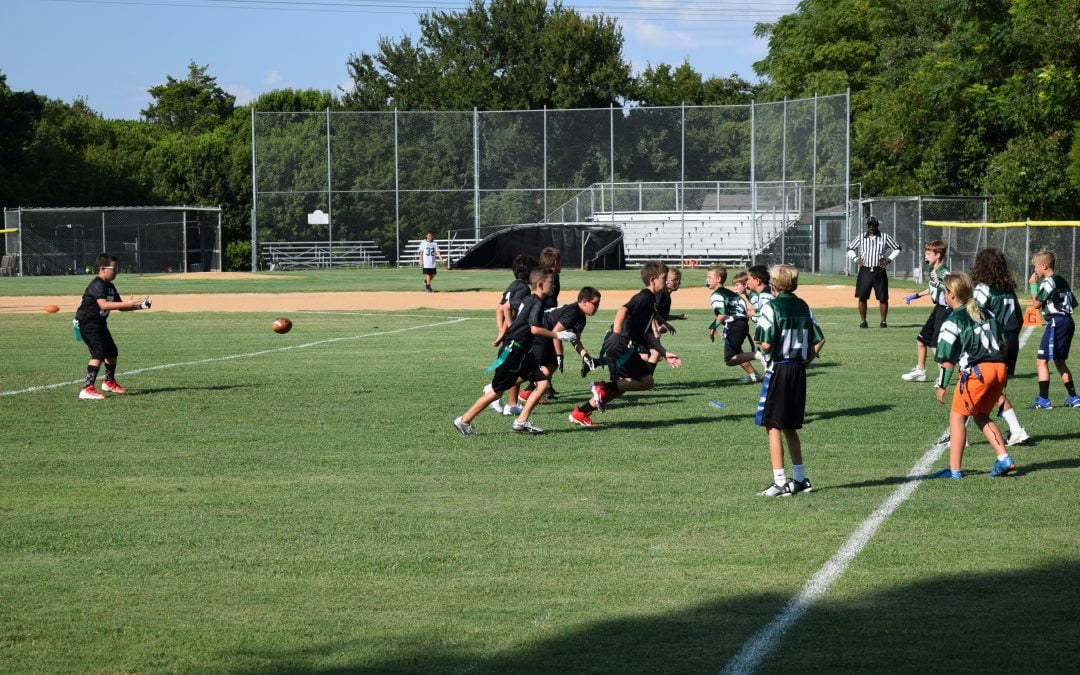 On September 20th our Bears Football team played against TMI and won with a score of 41-7! Sam Orick ran the ball 5 times and scored 3 touchdowns.  He rushed for 126 yards on 5 carries for 25 yards per carry. Conner Rohlack ran the ball 43 yards and scored two touchdowns, and kicked five extra points. Baley Cordes carried the ball seven times for 42 yards. Luke Jackson had a 53 yard kick return.

Your Brentwood Bears football team is ranked #7 in the state.

On September 16th our 5th grade flag football team played against St. Micheal’s and WON! This was the teams first win with a score of 12-6. Coach Harper stated, “The 1A team really came together in this game. The defense was great, and offense finally started clicking. The team worked hard and earned themselves a solid win”.

On September 24th our 5th grade flag football team played against Redeemer. The Bears won this game in 2OT with a score of 18-12. It was a thriller! Graham Auberger connected with Kenton Auberger in the 1OT to send it to 2OT. Graham ran in a touchdown, then threw a touchdown to Amir Dadashazar to seal the victory.

On September 19th the 6th grade volleyball team also played and lost against Veritas with scores of 25-14 and 25-18. The Lady Bears showed up much stronger this week with better serving and volleying. We couldn’t get into a rhythm after some wild hits and tough net play losing to Veritas in straight sets.

On September  26th the 5th grade Lady Bears played against Holy Family and won 2-1. This was the team’s first win. The 5th grade Lady Bears beat Holy Family in a thrilling three-set match with scores of 25-23, 14-25, and 15-13. The Lady Bears completed 33 out of 51 serves (65%), well above their season average. Strong serving by Henley Magee, Skyla Jimenez, Avi Bischoff, and Sevastiana Riveron helped lead the Lady Bears to their first victory. Kali Whitmire completed her first overhand serve at a critical point in the third match.

On September  26th the 6th grade volleyball team played against Holy Family. After a slow start, the Lady Bears came together and finished strong by winning the 1st set. 1st set highlights included Abby Lee with 6 straight service points. The Lady Bears continued to work together as a team in the 2nd set but came up short. In the 3rd set, the team really came together to win a hard fought victory.

On October 1st our 5th grade volleyball team played against Round Rock Christian Academy. The 5th grade Lady Bears lost a tough game with a score of 0-2. The Lady Bears struggled to overcome exceptional serving by one of the RRCA players. Skyla Jimenez and Gracyn Mayle displayed courage in the center-back position against the serves.  Kali Whitmire provided some excitement with her first overhand hits.