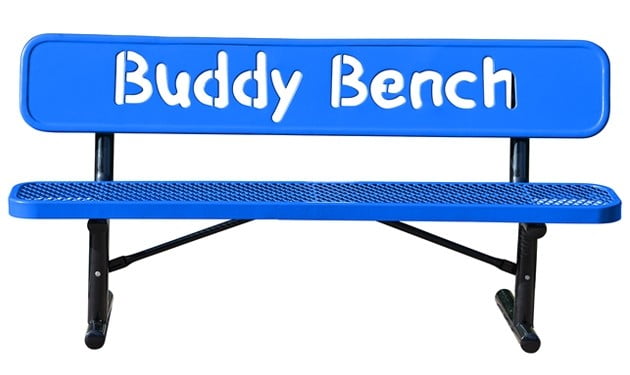 Imagine that you are a child again, feeling lonely on the playground even though there are children all around running, playing, and laughing, oblivious of the fact that you are alone. What would you do? Now let us suppose that you look across the playground and you spot a bench, a special bench, and no one is sitting on it. You know what to do. You walk across the playground and sit on the bench. Before long, another child notices you sitting on the bench and runs over to invite you to join in their game. You join the other children and no longer feel alone.

The special bench mentioned in this scenario is a buddy bench. Buddy benches, also called friendship benches, are appearing in school playgrounds throughout the US and in other countries, too. A buddy bench is a bench that a child sits on to signal to other children that he or she is feeling lonely and wants to play with someone. When other children see someone sitting on the buddy bench, they understand that the child is in need of a friend.

I first heard of the buddy bench last semester when two second grade students, Mallory Henley and Reese Smith, came to visit me in my office. They had heard about buddy benches at church and felt strongly that we needed one on our playground at Brentwood. They made a compelling case for the benefits of a buddy bench and I was quickly sold on the idea. The girls’ church (Brentwood Oaks) offered to provide the bench. The bench was ordered, has arrived, and will soon be installed on the playground that is north of Building A.