Trust in God, Be Blessed 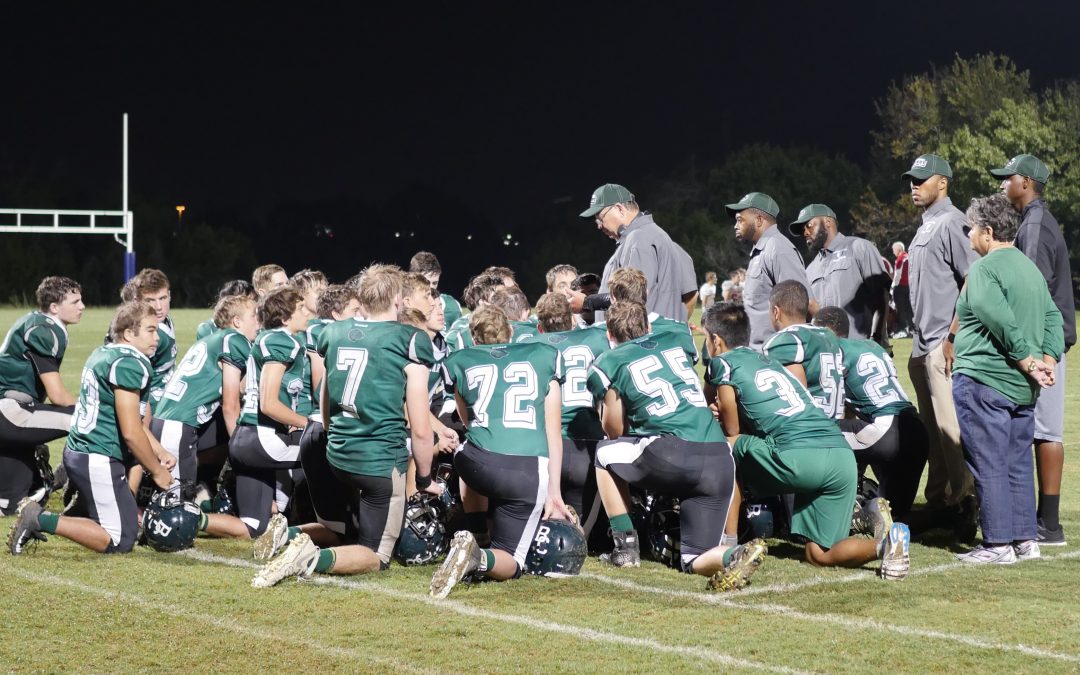 “Trust in self, be depressed. Trust in others, be distressed. TRUST IN GOD, BE BLESSED.”

At the beginning of the football season, Coach Caffey passed out business cards to players and parents with the Bear ensign and “BCS Athletics” on one side, and the saying above on the other side.  He went on to tell all of us parents that he wanted us to understand that during the course of a season there would be highs and lows; we would have reasons to shout for joy, and we would have times we just wanted to shout.  He wanted us to know that these boys were a team, but that they were boys learning and training to become men.

Coach Caffey wanted all parents to know that his team was greater than any individual player and yet his team needed every individual player.  He needed every player to believe in himself but not trust that he alone was the difference-maker because the team cannot win on the hands, legs, arms, or feet of the individual.  He wanted them to trust not on themselves alone.

He also wanted the parents to understand that every player needed to work because every player had to contribute.  Every player had to run, lift, practice, and work.  Those who did not put in the time and effort would not play. Those who did not earn the trust of their teammates by giving of themselves on the practice field and in the weight room would not represent the team on the field of play.  He told us that for our sons to be trusted by their teammates they needed to earn that right.  He told us that trusting in others was earned, not given.

But mostly what Coach Caffey told us that night was that our boys would win some games and they would lose a few.  He knew they were young and he knew the road ahead was bumpy.  Our boys have fought and they have been great.  They are now 6-2 with one of their losses being a last minute heartbreaker to the #1 team in the state.  They have been great.  They have won some and they have lost some – just like Coach Caffey said.

But something happened this past week; Coach Caffey missed the game this past Friday night.  He was in the hospital.  Coach Caffey, my friend, couldn’t be where his heart dearly wanted to be because his heart was in need of help.  So I watched 32 boys, quickly growing to become men, rally around a first-time head coach, Correy Washington, and pull out a 14-7 win over Schertz John Paul II on a cold and windy night.  Your Bears rallied, fought and overcame the other team’s “Senior Night” to pull out the win.

The win was great, but it wasn’t the best part of the night.  Two things really made the night special.  The first was watching the boys in the second half as they would break the huddle and run from the sideline they chanted Coach Caffey’s name.  As they made great play after great play, they yelled his name in tribute.  It was obvious they were playing for something and someone other than themselves.  This team was playing as a team because there was absolutely no way they were going to let their coach down.  The second thing that really stood out was after they prayed at the close of the game and they came to the sideline to sing the school song, Isaac Copeland shouted, “Sing it loud enough for Coach to hear you!” I don’t know why he said this, but I think he meant it.  And all the students there did.  And the BCS parents and fans did.  And our community stood strong, together for Coach Caffey.

So back to this week.  Monday morning Coach Caffey had quadruple bypass surgery.  Sitting with his wife in the waiting room, I wondered how those who only trust in themselves can be anything but depressed.  How those who trust only in man can be anything but distressed.  Instead, I watched Coach Caffey’s family talking, laughing and, yes, healthily worrying, but never doubting that Coach Caffey was where he needed to be.  I am thrilled to report that his surgery went well.  He has a road to travel to recover but he will not walk that road alone.  He has a wonderful wife, incredible kids and grandkids, a team ready to carry any load, and a Christian family.  Therefore by the grace of God…

TRUST IN GOD… BE BLESSED